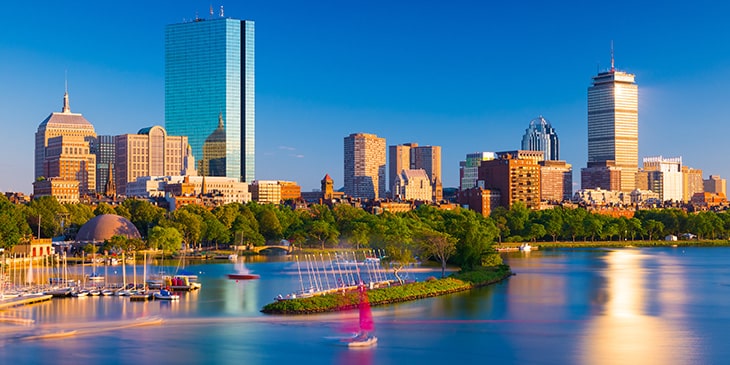 Boston, Massachusetts’ vibrant capital has a lot to offer visitors; the city has an incredible food scene, downtown theatre district, trendy neighbourhoods with boutiques galore, picturesque parks and gardens, colourful markets and a thriving art scene. Boston beams with contemporary appeal; there are many finely developed attractions dotted around the city which include cutting edge art institutions, towering skyscrapers and inventive fine-dine restaurants. As well as the state-of-the-art allure of this fast developing destination, Boston is also one of America’s oldest cities with a very long and rich past. There are many fascinating historical sites and attractions to explore here, as well as cobbled streets and ancient brownstone houses which take you back in time to the city’s bygone era. The Boston National Historical Park is a good place to start your historic sightseeing tour of Boston, with many significant ancient sites that highlight the city’s role in the American Revolution, including meeting houses, churches, parks, museums and burial grounds. Many of the sites here are featured in Boston’s famous Freedom Trail tour, one of the oldest historic tours in America. Brightsun Travel offers cheap air tickets to Boston, taking you to the very heart of this charming city.

Fenway Park should definitely be on your Boston itinerary; this iconic stadium is the home of the Boston Red Sox baseball team and has been since 1912. It’s a true landmark of the city and it’s America’s oldest major-league baseball stadium that’s still in use. Another major attraction in Boston is the Quincy Market, a colourful ancient marketplace and National Historic Landmark dating back to 1826, featuring hundreds of shops set across three market buildings, as well as old-style pushcarts selling local items and a host of restaurants and colonnade eateries. Then there’s the New England Aquarium, which is home to plenty of colourful marine species, including jellyfish, stingrays, seals, penguins and green sea turtles which you can learn about and encounter through many fun interactive exhibits and behind-the-scenes tours. Boston also has a number of interesting museums which are a major asset of the city. Some of the must-visit institutes include the Museum of Science, the John F. Kennedy Presidential Museum and the Museum of Fine Arts. Contact Brightsun Travel about purchasing cheap flights to Boston and look forward to the getaway of a lifetime in this amazing city.