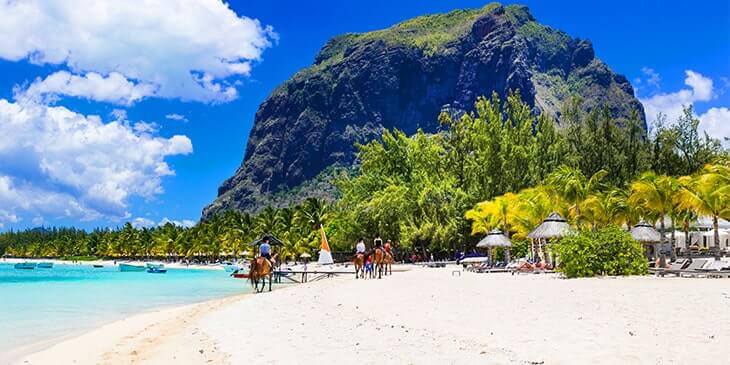 Mauritius is one of the most paradisiac destinations in the world with tropical island settings, luxurious beachfront resorts, colourful cultures, wonderful wildlife species, world-class golf courses, charming towns with warm and welcoming locals and mouth-watering creole cuisines. There are various breath-taking natural wonders on this Indian Ocean island, from lush green mountains and volcanic peaks to sugar cane fields, powder-white sand beaches and turquoise blue lagoons. There are also a number of national parks and nature reserves in Mauritius that are home to rare wildlife and bird species, as well as forests, waterfalls and mountains with hiking trails. The Black River Gorges National Park is a highlight, which boasts the highest mountain on the island. Mauritius is one of the world’s top diving spots due to its warm waters with great visibility, surroundings of coral reefs and fascinating marine life. Other excellent water activities available in Mauritius include snorkelling, deep sea fishing, kite surfing and sea karting Brightsun Travel offers great deals on flights to Mauritius, taking you to the centre of this idyllic island.

Away from its beaches and nature parks, Mauritius has a treasure trove of history and a melting pot of cultures to discover. Port Louis is the island’s charming capital and cultural hub, with local markets, museums, ancient colonial buildings, religious sites and the oldest race course within the Southern Hemisphere – Champs De Mars. This historic city is full of gems; start by visiting the Blue Penny Museum which displays various rare stamps, including the red one penny and blue two penny stamp - two of the rarest stamps in the world, as well as other ancient treasures such as paintings, photos, old maps and engravings. Another immersive attraction in Port Louis is Aapravasi Ghat, a famous World Heritage Site and the remains of an immigration depot that played an important part in Mauritius’ past. Finally, the Bazaar of Port-Louis is a popular attraction; also known as Central Market, this bustling local bazaar comprises of stalls selling everything from fresh groceries and street food to handicrafts, jewellery, clothing and other traditional items. You can book air tickets to Mauritius with Brightsun and look forward to many unique travel experiences on this immense island.