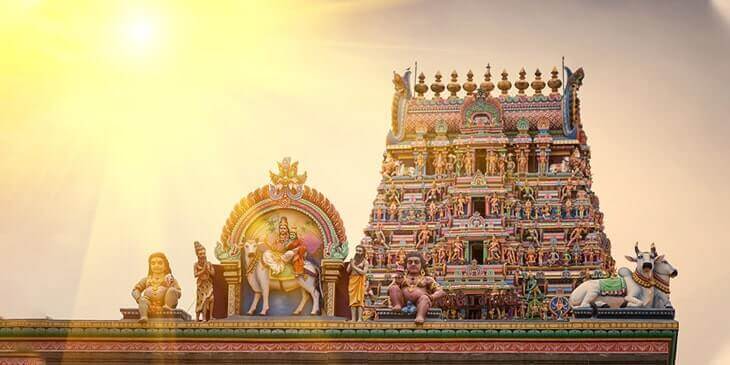 Chennai is South India’s cultural capital that mesmerizes its visitors with a dynamic array of historic temples, churches, colourful neighbourhoods and stunning beaches. This enticing capital of Tamil Nadu is an epicenter of South Indian arts, cultures and traditions, and also has a rich history worth discovering. Visit Fort St. George, an impressive monument that houses the Saint Mary’s Church, the first church in India built by the British. You can also visit the Santhome Church which was constructed with neo-Gothic architecture by the Portuguese. Another prominent attraction of the city is the 17th-century Kapaleeshwarar Temple, dedicated to Lord Shiva. Other must-visit spots include the Velankanni Shrine, Shirdi Sai Baba Temple, Sri Bhaktha Anjaneyaswami Temple, Parthasarathy Temple which is the oldest temple in the city, and the Thousand Lights Mosque, one of India’s largest mosques with multiple domes and minarets. After taking a tour of Chennai’s landmarks, why not step inside a local restaurant to sample authentic South Indian dishes, including masala dosa, rasam, sambar, lemon rice, and appam. There’s plenty to choose from! Contact Brightsun Travel to book direct flights to Chennai and look forward to the trip of a lifetime here.

Chennai is also home to some of the country’s best wildlife reserves, as well as captivating museums. Visit the DakshinaChitra Museum to witness a range of South Indian artworks and exhibits related to pre-colonial clothing and music and dance forms. You can also visit the Government Museum, one of India’s oldest public museums, to discover a rare collection of coins and historic artifacts, including statues from the 7th-century Pallava dynasty. The Arignar Anna Zoological Park is a must-visit of Chennai and the largest zoological park in India; here you can spot several endangered species of insects, birds, reptiles and mammals, and embark on exciting lion and elephant safaris. Then there’s the Guindy National Park, allowing you to get up close to more than 130 species of birds and 14 species of mammals, including jackals, blackbucks and deer. Another worthwhile wildlife attraction is the Madras Crocodile Bank Trust, a conservation agency home to over 2,400 reptilian species, including 14 species of crocodiles. Brightsun Travel offers a range of Chennai flight deals, taking you to the heart of this paradise for wildlife lovers, history enthusiasts and culture vultures.