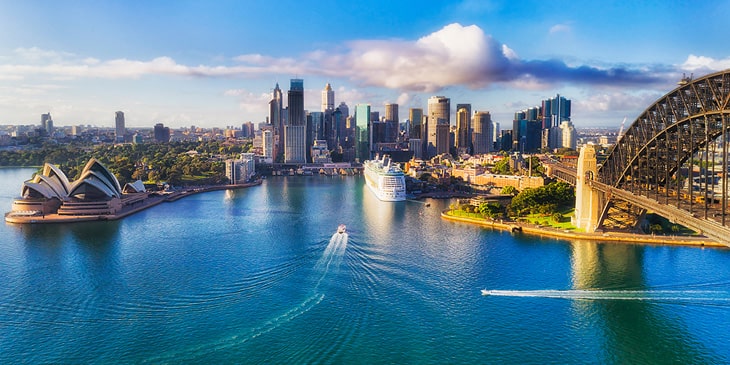 Australia, The Land Down Under is an amazing country with pristine biodiversity, sparkling waterfalls, marbled rock tunnels, golden deserts and many other beautiful landscapes. From the magnificent Great Barrier Reef to the vast open spaces of the Outback, Australia is home to endless awesome destinations that are waiting to be explored. Surf at Bondi beach, take a selfie with a quokka on Rottnest Island, explore the 500,000 year old Ngilgi cave, visit the world’s largest monolith rock at Uluru, track through the desert from Birdsville to Cape York or head to Kangaroo Island to spot Australia's most iconic animal…There are just so many opportunities for adventure here. You can even visit Fraser Island, the world’s largest sand island famous for its striking freshwater lakes, crystalline creeks, giant dunes and lush rainforests.

Perhaps Sydney is on your bucket list? This beautiful Australian city boasts glorious beaches, world-class shopping malls and vibrant nightlife. Visit the Sydney Opera House, Australia's most famous landmark and the iconic Harbor Bridge. Other popular destinations worth visiting in Sydney include the Sydney Tower, Jenolan Caves and the marine aquarium at Darling Harbor. Alternatively, visit Melbourne, a cosmopolitan haven famous for its world-class galleries, theatres, fashion boutiques and fine dine restaurants. Must do experiences in Melbourne include skydiving over the glorious green Yarra Valley and sampling delectable Asian cuisines at Chinatown. Other wonderful Australian cities include Perth, home to some of Australia's most spectacular surf beaches and Brisbane, an epic art hub home to the famous Queensland Museum and Gallery of Modern Art. Brightsun Travel offers a bunch of cheap flights to Australia, taking you to this immense country in style.