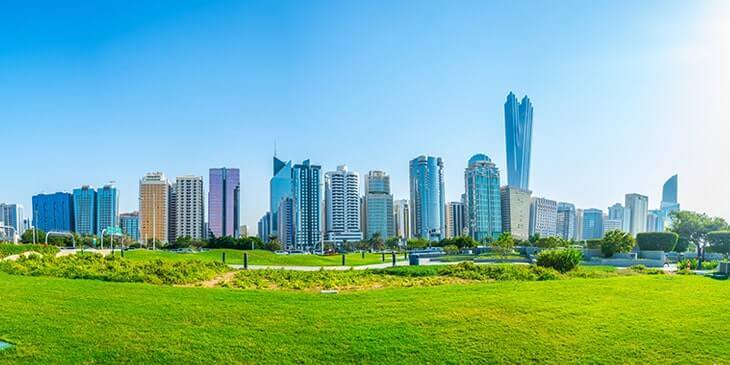 Abu Dhabi is a world-class city in the United Arab Emirates with state-of-the-art mega malls, an excellent night life consisting of shisha lounges and rooftop bars, a whole list of world records, a unique blend of past and present with towering skyscrapers alongside ancient monuments and a great number of galleries and museums. This city is absolutely stunning; from desert landscapes to pristine beaches, there is no shortage of natural beauty here. Abu Dhabi also has an immense selection of iconic attractions, including the recently opened Louvre Museum which exhibits modern art masterpieces and the majestic Sheikh Zayed Grand Mosque, featuring an Islamic style exterior of white marble and semi-precious stones. The main entertainment hub of Abu Dhabi is the man-made Yas Island, which offers something fun for every type of traveller. Here there’s the immense Yas Waterworld with over 40 rides and slides, Ferrari World which is home to the world’s fastest rollercoaster, Yas Mall which is one of the world’s largest shopping malls, the beautiful Yas Beach and the iconic Warner Bros. World™ Abu Dhabi which opened its doors last year, featuring six immersive lands dedicated to iconic Warner bros franchises and characters. Brightsun Travel has a remarkable range of cheap flights to Abu Dhabi.

Despite its contemporary appeal, Abu Dhabi has a rich history dating back as far as the 3rd millennium BC and has retained its strong Bedouin heritage. There are many significant buildings, museums and sites that allow you to step back in time to the city’s past. Let’s start with the oldest building in Abu Dhabi, Qasr Al Hosn fort, a former residence to the city’s ruling family which is now a museum with interesting artefacts and photos. Other captivating ancient sites include Al Jahili Fort, which was built during the 1800s as a residence of the Al Nahyan ruling family and Heritage Village, which is a replica of a traditional Bedouin village showcasing ancient Emirati lifestyles. Many local traditions and ways of life are still present in Abu Dhabi, so it’s a very culturally enriching destination. One particularly special cultural experience here is a daytrip to the Liwa Oasis, which is the ancestral home of the Bani Yas Tribe who once settled in Abu Dhabi. The area boasts some of the largest sand dunes in the world and forts over 100 years old. Book cheap tickets to Abu Dhabi with Brightsun and look forward to immersing yourself in this city’s captivating cultures.