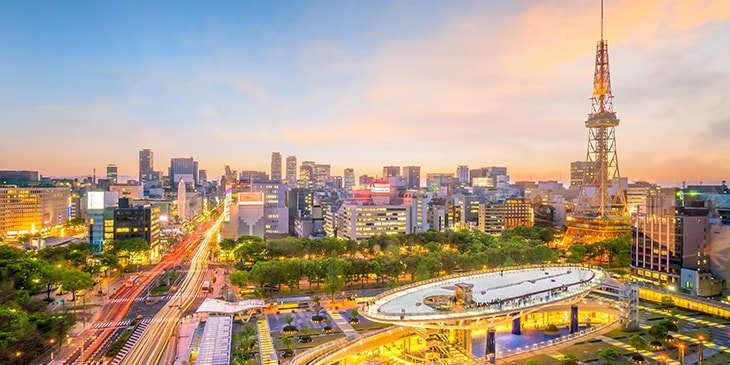 Nagoya is a charming destination in Japan home to fascinating museums and galleries, a vibrant nightlife, a mixture of modern monuments and ancient structures and delectable cuisines including local street food snacks. There are lots of amazing things to see and do here, from family-friendly attractions to romantic hotspots and sightseeing landmarks. Brightsun Travel has an extensive range of cheap flights to Nagoya.

There are some beautiful attractions to admire in Nagoya including the Atsuta Shrine, which is considered as the most significant Shinto shrine in Japan as it’s home to one of the Three Sacred Treasures of Japan – the Kusanagi sword. Another must-visit site is the Tokugawa Art Museum which is home to a number of treasures once owned by Japan’s famous Tokugawa family, including paintings, weapons, documents and porcelain.

The 180m tall Nagoya TV Tower is a popular attraction in Nagoya which has an indoor and outdoor observation deck offering impressive views of the city and mountains, as is the Higashiyama Zoo and Botanical Gardens which is home to lots of unique plant and animal species and Nagashima Spa Land which has a water park and over 40 thrilling rides, including the world’s longest roller coaster.