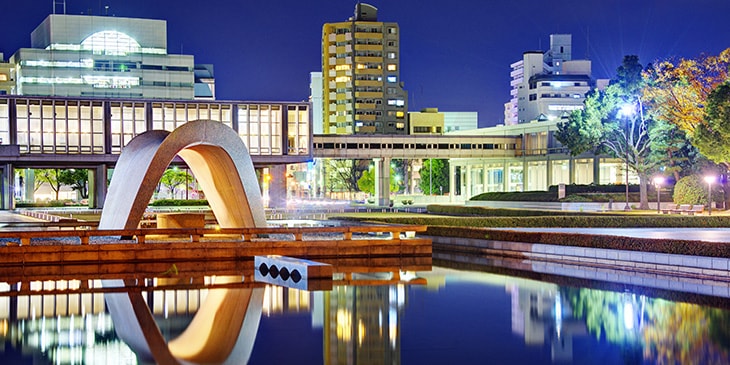 Hiroshima is a modern Japanese city which is known for being the site of the tragic atomic bomb attack during World War II in 1945. Despite such tragedy, Hiroshima has positively developed and has been rebuilt, and it’s now considered as the world’s peace capital. It’s a very heart-warming place to visit and learn about this significant time in history. Discover interesting museums, heritage sites, temples and serene Japanese gardens in this charming city.

A trip to Hiroshima is most certainly not complete without starting your sightseeing at the Peace Memorial Park and Museum, which is dedicated as a tribute to the city’s former attack. Here you can discover the Cenotaph for the A-Bomb Victims – a tomb for those who died as a result of the atomic bomb and the A-Bomb Dome which is one of the city’s few remaining buildings from before the attack and a UNESCO World Heritage Site.

Another worthwhile attraction in Hiroshima is Hiroshima Castle which was renovated after being demolished in the World War II attack. This captivating landmark allows you an insight into Hiroshima and its history with some interesting exhibits. Hiroshima is considered as the gateway to the island of Miyajima, which is home to the famous Itsukushima Shrine and its floating tori gate. Book tickets to Hiroshima with Brightsun and look forward to an enriching getaway to Japan.