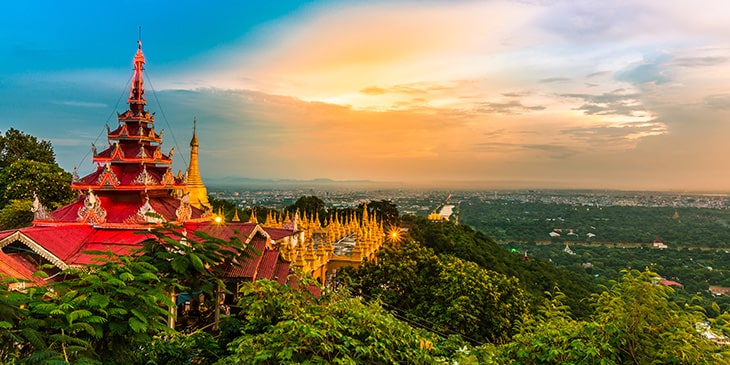 Mandalay is a beautiful Burmese city and the former royal capital of Myanmar, situated on the banks of the picturesque Irrawaddy River. This cultural hub is definitely a hidden gem of Asia. It’s less touristy than other major Asian cities, offering visitors authenticity and great value accommodation along with local markets selling traditional goods, stunning monasteries, temples and mosques, traditional Marionette shows, a charming riverside and lots of local teahouses. Mandalay has a very interesting history; the city dates back to the 18th century and there is a number of fascinating ancient attractions in and around the city. Brightsun Travel offers an array of discount airfares to Mandalay, taking you to the heart of this charming destination.

Mandalay is an amazing sightseeing destination with countless monuments to admire. Start by visiting the Mahamuni Buddha Temple, one of Burma’s most important Buddhist sites which displays the highly revered Mahamuni Buddha image. The Kuthodaw Pagoda is another impressive Buddhist site, comprising of a giant golden pagoda and 729 shrines which each contain a marble slab carved with Tripitaka text, together forming the world’s largest book. Then there’s the Shwenandaw Monastery, which was an original part of the city’s royal palace. The monastery is made entirely out of teakwood with some beautiful carvings. Make sure you also visit the sacred Hsinbyume Pagoda, a shimmering white monument that was constructed in 1816. This unique pagoda offers a perfect backdrop for selfies!

A must-do experience in Mandalay is a climb up the top of Mandalay Hill, which offers amazing elevated views of the river, the city and all of its mesmerising buildings, especially at sunset. Another must-visit attraction in Mandalay is the U Bein Bridge, the world’s longest and oldest teakwood bridge dating back to 1849. The bridge is used by locals who cross Taungthaman Lake, and is best visited at sunrise, when the monument reflects gracefully on the water. Finally, why not venture out of the city for a day and discover the spectacular Dee Doke Waterfalls, which comprise of the most stunning set of vibrant blue coloured natural pools. Book cheap tickets to Mandalay now and look forward to endless exploration in this immense Burmese city.