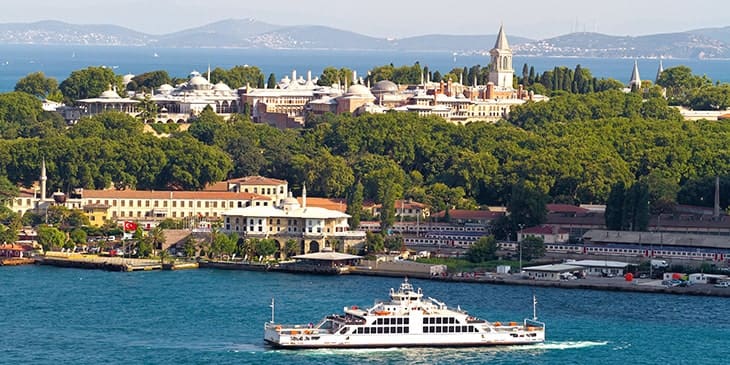 Istanbul is Turkey’s largest city with boundless holiday highlights; there are bustling bazaars to browse, traditional Turkish cultures to immerse in, trendy art galleries and museums to explore, Turkish hammans to relax in and stunning architectural buildings to admire including palaces, churches and mosques, as well as ancient ruins, vibrant night spots, authentic coffee houses and traditional Turkish restaurants. With over 2500 years of history, Istanbul beams with ancient charm;, start your historic sightseeing at the Old City, which boasts many iconic landmarks including the ornately decorated Ottoman style Topkapi Palace, the Hagia Sophia Museum which formerly served as a church and mosque, and the spectacular Blue Mosque, built in the early 1600s with impressive domes and minarets and a blend of traditional Islamic architecture and Byzantine styles. Other historical places of interest include the grandeur Süleymaniye Mosque, built by famous architect Mimar Sinan for one of the Ottoman Empire’s greatest rulers, and Dolmabahçe Palace, originally constructed in the 1800s with a blend of Baroque, Ottoman and Neoclassical architecture. Brightsun Travel has a fantastic range of cheap flights to Istanbul available all year round, so why not plan yourself an exciting break to this charming city?

Istanbul has an amazing food scene due to its diverse cultural influences; from street food markets and stalls serving authentic Turkish cuisines to upscale restaurants serving international fare, there’s something special for every palate here. Head to the foodie’s hub of Beyoglu, which has a diverse selection of restaurants including tea houses, cosy cafes, restaurants serving fresh seafood and local food stalls. To sample the city’s best Turkish delight, visit the city’s Egyptian Bazaar which also sells a variety of other Turkish sweets, teas, cheeses and more. Istanbul is not only a foodie hotspot, but also a prominent centre of arts and culture with many significant museums, including the Istanbul Archaeology Museums which contain artefacts from several of the city’s civilisations, the Galata Mevlevi Museum which boasts cultural exhibits and hosts traditional performances, and the Turkish and Islamic Arts Museum which houses lots of interesting artefacts including antique carpets and handwritten calligraphy documents. Finally, a trip to Istanbul is incomplete without taking a cruise along the famous Bosphorus, a beautiful strait separating Europe from Asia and offering immense views of the city. Book cheap tickets to Istanbul with Brightsun and look forward to the ultimate city break!